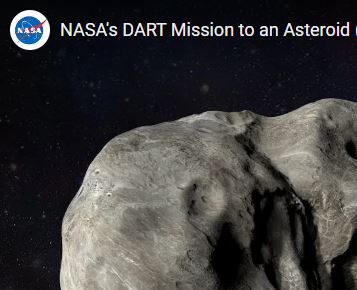 SKTLs Newsletter #38 includes information about DART’s big asteroid impact mission happening today, the Artemis 1 SLS passes its fueling test and is still having delays, ULA launches its Delta IV from Vandenberg Air Force Base for the last time, ORBITS space bill is proposed by congress, the SpaceX Crew-5 is preparing for its upcoming mission, quantum cryptography satellites are finding their place in space, the Hubble Space Telescope captures the image of the day, space startups news and interesting facts about the asteroid Dimorphos.

“Why can’t you get cell reception in space?
It’s 0-G!”
redbubble.com

Artemis 1 Delays Again
After completing its successful fueling test, Artemis 1 is still having trouble getting off the ground.

Delta 4’s Final West Coast launch
ULA is under contract to launch two more NRO satellites on the Delta 4 Heavy in 2023 and 2024, but will not be launching those from the west coast.

SpaceX Crew-5
Two NASA astronauts, one cosmonaut and a JAXA astronaut are in preflight preparations for their upcoming trip to the ISS.

Space Image Of The Day!
The Hubble Space Telescope captures an image of a young star exploding in the Taurus constellation.

Private company to fly Saudi astronauts. Axiom Space will fly two astronauts from Saudi Arabia, one of them a woman, to space as soon as next year.

OpenConstellation, shared space infrastructure. Open Cosmos is on a mission to give businesses, nonprofits, national and regional governments access to actionable space data.

Fun facts about space…
This evening, NASA’s Double Asteroid Redirection Test will be impacting with an asteroid called Dimorphos.
The asteroid Dimorphos is a small asteroid satellite and is the minor-planet moon of a synchronous binary system including the much larger asteroid Didymos.